CELL PRESS—Until recently, very little was known about the genetic relationship between modern humans of the Upper Paleolithic age (the period of time between 50,000 and 10,000 years ago, also called the Late Stone age) and today’s populations. But with direct DNA sequencing, researchers are discovering unexpected genetic connections between individuals on opposing sides of Eurasia. These suggest a complex history that may represent early gene flow across Eurasia or an early population structure that eventually led to Europeans and Asians.

In a review* published in the journal Trends in Genetics on January 25, scientists at the Chinese Academy of Sciences in Beijing discuss what we know about the genetics of ancient individuals from Eurasia (Europe and Western Asia) between 45,000-7,500 years ago. The authors summarized work that investigated the genomes of more than 20 ancients in the Eurasian family tree, including the 45,000-year-old Ust’-Ishim individual from Central Siberia, for their paper.

“Aside from these individuals, it is a fact that sampling for the Eurasian region is sparse for all time periods except the present-day,” says co-author Qiaomei Fu, a paleogeneticist at the Chinese Academy of Sciences. “But with the information from the several individuals available for ancient DNA sequencing we do have hints at interesting population structure, migration and interaction in East Asia.”

“Genetic studies of ancient individuals have become more frequent in recent years because of technology,” says Fu. “As a result, we can now see the presence of multiple distinct subpopulations in Europe and in Asia, and these in turn contribute different amounts of ancestry to more recent subpopulations.”

“Right now is a great time to study human evolutionary genetics because the development of sequencing technology and computing resources minimizes destruction of samples and maximizes data generation and storage,” Fu says. “With large present-day genomic datasets and increased international collaboration to handle the many newly sequenced ancient datasets, there is huge potential to understand the biology of human prehistory in a way that has never been accessible before.”

Looking ahead, Fu and colleagues hope to extend this type of sequencing and analysis to learn more about the genetic prehistory of East Asia and other regions, including Oceania, Africa, and the Americas. “All of those areas have a rich human prehistory, particularly in Africa, so any ancient DNA from those continents will likely resolve some major questions on human migration,” she says. 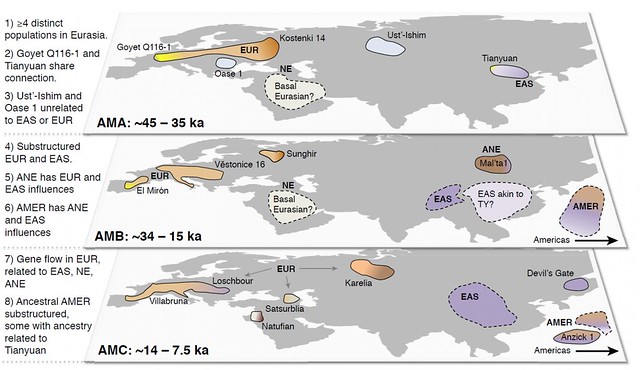 This is a schematic of populations in Eurasia and the Americas from 45,000 to 7,500 years ago. A summary of major events in each of the time periods is on the left. Melinda A.Yang and Qiaomei Fu