PLOS—Ancient DNA from the Phoenician remains found in Sardinia and Lebanon could provide insight into the extent of integration with settled communities and human movement during ancient times, according to a study* published January 10, 2018 in the open-access journal PLOS ONE by E. Matisoo-Smith from the University of Otago, New Zealand and Pierre Zalloua from the Lebanese American University, Beirut, and colleagues. The researchers looked at mitochondrial genomes, which are maternally inherited, in a search for markers of Phoenician ancestry.

The Phoenicians were an ancient civilization who emerged in 1800 BCE in the Northern Levant and by the 9th century BCE had spread their culture across the Mediterranean to parts of Asia, Europe and Africa through their trade networks and settlements. Despite their widespread influence, most of what we know about the Phoenicians comes from Greek and Egyptian documents on this civilization.

The researchers found evidence of continuity of some lineages of indigenous Sardinians after Phoenician settlement, which suggests that there was integration between Sardinians and Phoenicians in Monte Sirai. They also discovered evidence of new, unique mitochondrial lineages in Sardinia and Lebanon, which may indicate the movement of women from sites in the Near East or North Africa to Sardinia and the movement of European women to Lebanon. Combined, the authors suggest that there was a degree of female mobility and genetic diversity in Phoenician communities, indicating that migration and cultural assimilation were common occurrences.

Pierre Zalloua says, “this DNA evidence reflects the inclusive and multicultural nature of Phoenician society. They were never conquerors, they were explorers and traders”. 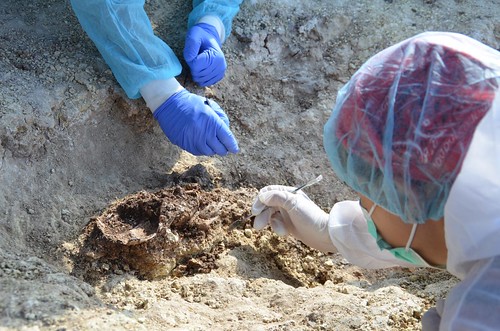 A sampling from the Tomb 351 Monte Sirai. Michele Guirguis