An international research team led by Israel Hershkovitz of Tel Aviv University has discovered a modern human fossil dated to between 177,000 and 194,000 years old, excavated from the Misliya Cave at Mount Carmel in northern Israel. The find pushes back the estimated time range as evidenced by the archaeological record for arrival of modern humans (Homo sapiens) out of Africa by about 40,000 to 50,000 years.

The fossil, an upper jaw bone designated ‘Misliya-1’, features some intact teeth and falls within the upper size range characteristic of modern human teeth. Scientists examining Misliya-1 maintain that the fossil shares some features but lacks other key features identifiable with Neandertals and other earlier hominin species, such as a low, broad tooth crown, and that it otherwise shares many features of teeth and jawbones typical of modern humans. They analyzed the fossil using microCT scans and 3D virtual models, then compared it to other hominin fossils from Africa, Europe and Asia.

“While all of the anatomical details in the Misliya fossil are fully consistent with modern humans, some features are also found in Neandertals and other human groups,” said Rolf Quam, Binghamton University anthropology professor and a coauthor of the fossil study*. “One of the challenges in this study was identifying features in Misliya that are found only in modern humans. These are the features that provide the clearest signal of what species the Misliya fossil represents.”

Stone tools were also excavated near Misliya-1. The tools, said by the archaeologists to have been produced using the Levallois technique, may represent the earliest known association of the technique with modern humans in this region, suggesting that the emergence of this technology may have been due to the appearance of modern humans in the Levant. Levallois can be found in Middle Stone Age assemblages associated with Home sapiens in Africa.

The archaeological evidence from Misliya Cave thus far reveals that the inhabitants of the cave were capable hunters of large game species, controlled the production of fire and were associated with an Early Middle Paleolithic stone tool kit, similar to that found with the earliest modern humans in Africa.

While older fossils of modern humans have been found in Africa, the timing and routes of modern human migration out of Africa are key issues for understanding the evolution of our own species, said the researchers. The region of the Middle East represents a major corridor for hominin migrations during the Pleistocene and has been occupied at different times by both modern humans and Neandertals. This new discovery opens the door to demographic replacement or genetic admixture with local populations earlier than previously thought. Indeed, the evidence from Misliya is consistent with recent suggestions based on ancient DNA for an earlier migration, prior to 220,000 years ago, of modern humans out of Africa. Several recent archaeological and fossil discoveries in Asia are also pushing back the first appearance of modern humans in Eurasia and, by implication, the migration out of Africa.

For all of these reasons, “Misliya is an exciting discovery,” says Quam, “It also means that modern humans were potentially meeting and interacting during a longer period of time with other archaic human groups, providing more opportunity for cultural and biological exchanges.” 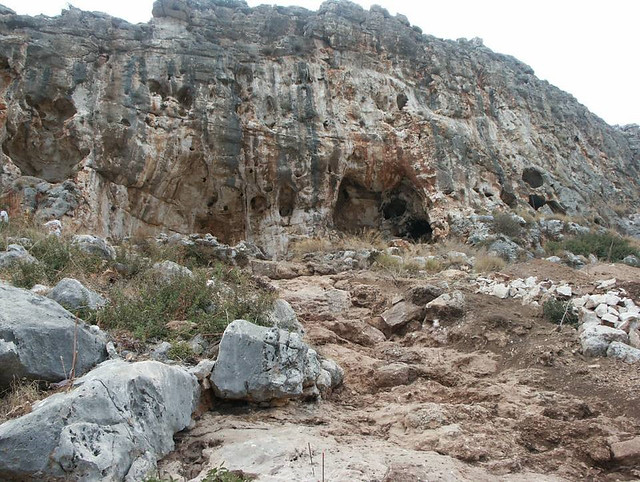 A view of Misliya Cave when approached climbing from the coastal plain. The cave is located some 90 m above mean sea level (AMSL) and is part of a series of prominent prehistoric cave sites located along the western slopes of Mount Carmel, Israel. The cave had collapsed following the Early Middle Paleolithic human occupation, represented by rich lithic and faunal assemblages associated with the maxilla (Misliya-1) of a modern human. Strongly cemented archaeological sediments (breccias) that extend some 30 m west of the cliff indicate that the cave had once been very large. Mina Weinstein-Evron, Haifa University 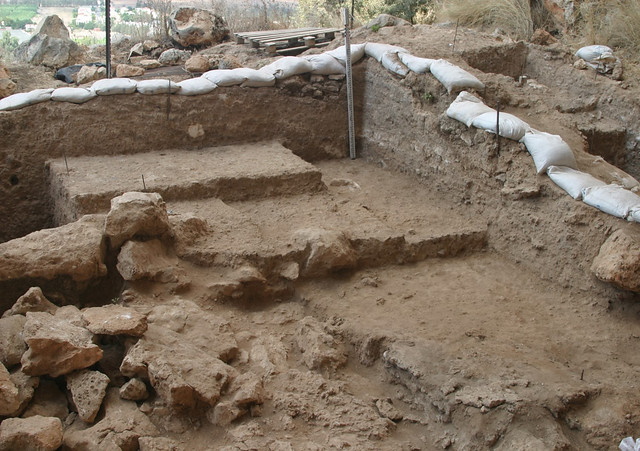 The Misliya Cave Early Middle Paleolithic layers of the Upper Terrace of the cave, during excavation (viewed from the southeast). The layers here are some 1.5-2 m thick. Note the in-situ hearth, consisting of indurated dark ashy sediment, at the bottom central-right part of the picture. Hearths were repeatedly constructed during the long habitation of the cave. The habitual use of fire is also evident from abundant wood ash, as well as burnt animal bones, flint implements and phytoliths. Charred laminated vegetal tissues constitute the earliest evidence for bedding or matting to date. Mina Weinstein-Evron, Haifa University 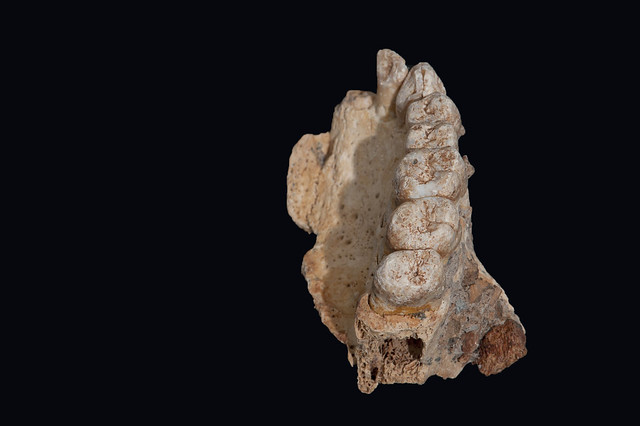 The Misliya-1 left maxilla. All teeth are present except the central incisor. The shape and structure of the teeth and the dentine underneath yielded important data regarding the definition of this specimen as Homo sapiens. Israel Hershkovitz, Tel Aviv University 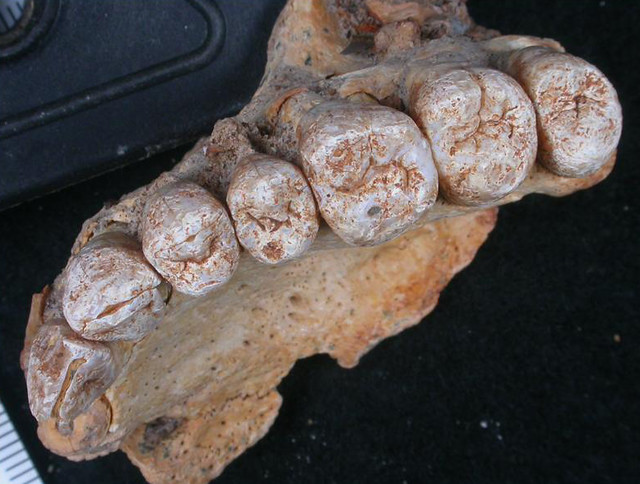 Close-up view of the of Misliya-1 dentition, showing details of the crown topography and dental features. Gerhard Weber, University of Vienna 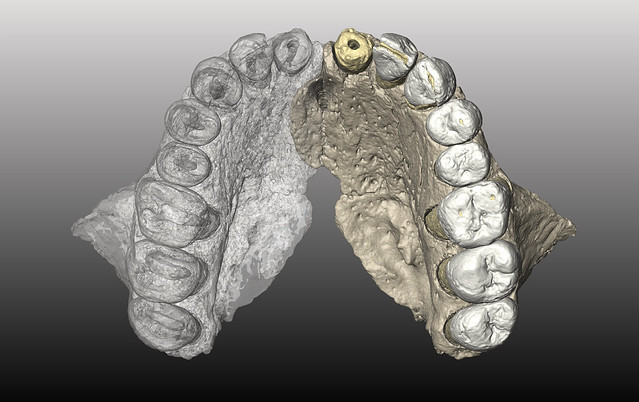 Virtual reconstruction of the left upper jaw of Misliya-1. The right (transparent) side is a mirror image of the preserved left side for visualization purposes. The dental arch is parabolic and the alignment of the anterior teeth appears very modern human like. Gerhard Weber, University of Vienna 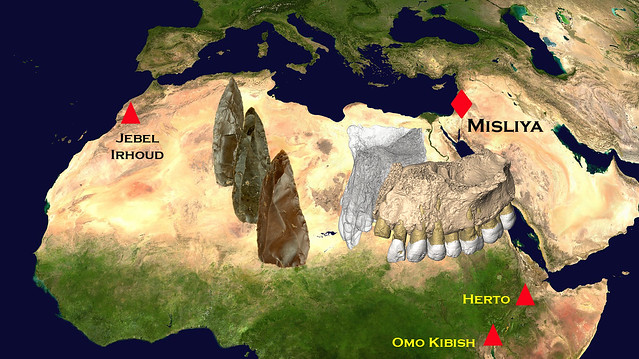 Location of early modern human fossils in Africa and the Middle East. The fossils from Jebel Irhoud date to 315,000 years ago and are thus older than Misliya, while those from Omo Kibish (195,000) and Herto (160,000) are similar in age to Misliya (177,000-194,000). The 3D virtual reconstruction of the Misliya-1 maxilla and several Early Middle Paleolithic stone tools from Misliya Cave are also included. Similar stone tools have been found at Jebel Irhoud. Image modified from [http://visibleearth.nasa.gov/view_rec.php?vev1id=11656 “Blue Marble”]. Rolf Quam, Binghamton University

For more about all of the astonishing new discoveries of early humans in the Levant, look for the in-depth special feature article, Before Kings and Temples, in the upcoming Spring 2018 issue of Popular Archaeology Magazine.