PROCEEDINGS OF THE NATIONAL ACADEMY OF SCIENCES—A study* suggests that early Neanderthals in southern Tuscany may have used fire to manufacture wooden tools used for foraging. In 2012, excavations for constructing thermal baths at Poggetti Vecchi, nestled at the foot of a hill in Grosseto in southern Tuscany, turned up a trove of wooden implements and fossil bones of the straight-tusked elephant Palaeoloxodon antiquus. The site was radiometrically dated to the late Middle Pleistocene, around 171,000 years ago, when early Neanderthals inhabited the region. Biancamaria Aranguren and colleagues report that most of the wooden implements were hewn from boxwood branches and likely used as digging sticks. The ends of the 100 cm-long sticks were fashioned into blunt points and rounded handles useful for foraging; such digging sticks have been known to be used for gathering plants and hunting small game. Cut marks and striations on the sticks bear witness to the manufacturing process, and signs of superficial charring and microanalysis of blackened surfaces suggest the use of fire, in addition to stone tools, to scrape and shape the sticks. The choice of boxwood, among the hardiest and heaviest of European timbers, and the inferred use of fire buttress the technical mastery of toolmaking by early Neanderthals, and suggest the early use of pyrotechnology for fabricating wooden tools. According to the authors, the finds at Poggetti Vecchi furnish some of the earliest evidence of wood processing and fire use by Neanderthals. 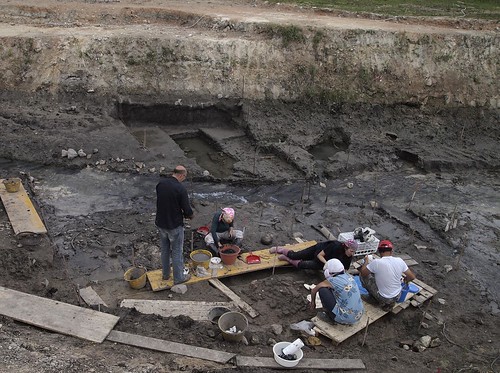 Poggetti Vecchi, Grosseto (Italy). This is a general view of the excavation. PNAS 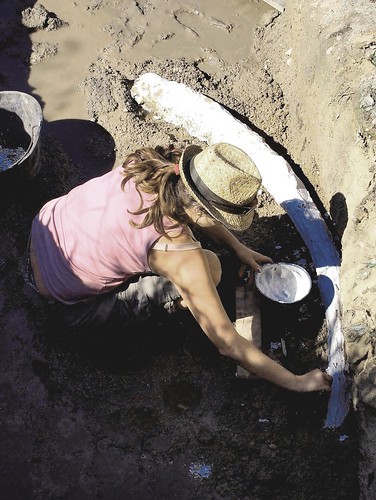 Poggetti Vecchi, Grosseto (Italy). The excavation of the tusk of a straight-tusked elephant. PNAS 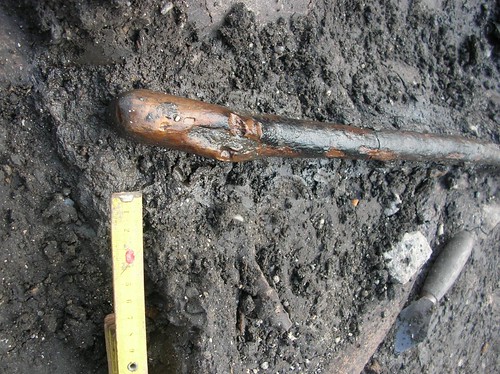 Detail of the handle of digging stick no. 2 on the paleosurface U2 of the Poggetti Vecchi site. PNAS