Archaeological investigation in Sibudu’s Howiesons Poort indicates the use of barbs in hunting technology. University of the Witwatersrand—The Howiesons Poort of southern Africa is a well-known techno-tradition in the Middle Stone Age. Material culture associated with it includes backed stone tools, the manufacturing of bone tools and other implements, and engraved ochre and ostrich eggshell that have been taken as early signs of symbolic expression. Since its first inception, the Howiesons Poort (between roughly 65,800 BP and 59,500 BP) has been considered unusual because of its so-called ‘innovative technologies’ reminiscent of the Later Stone Age/Upper Palaeolithic. In the recent years, the hunting technology associated with this exceptional industry has been discussed and debated.

Research collaboration between the University of Liège (TraceoLab) and the University of the Witwatersrand, led by Dr Paloma de la Peña, a researcher at the Evolutionary Studies Institute at Wits University in South Africa, has revealed one of the strongest and oldest bodies of evidence for the use of barbs as projectiles in prehistory. This discovery was made when small quartz implements from Sibudu, showing tiny notches on their edges, were examined in detail to understand the reasons for such features. Sibudu is a rock shelter located near Tongaat in KwaZulu Natal, South Africa, and has a long and diverse archaeological sequence. It has in recent years become central to the study of South African Middle Stone Age culture and technology. The research was published today in the Journal of Archaeological Science.

Barbs are laterally hafted armatures that serve to increase the cutting capacity of a projectile if hafted parallel to the haft or to retain the projectile in the animal if hafted obliquely to the haft. They can be used either independently on self-pointed spears or arrows, or in combination with weapon tips. Their use is well-known from the later stages of the European Upper Palaeolithic, but it is not clear when they first appeared, or how widely they were used before the European Upper Palaeolithic and the African Later Stone Age. The presence of barbs usually implies the use of some kind of glue, which adds to the technical know-how of prehistoric hunter-gatherers.

In their study of the Sibudu material, the authors undertook an extensive experimental program where they knapped quartz tools similar to the archaeological ones, and replicated processes that they thought would be responsible for the formation of notches. The experiments included intentional making of notches on some of the tools, the use of others as projectile elements, and the exposure of some to trampling to simulate the situation at settlement sites. The experimental and archaeological material was then analyzed in-depth using specialized methods that focus on microscopic wear features. The viewing of the experimental and archaeological wear patterns side by side led the archaeologists to propose that use as barbs is the best explanation for the damage observed on those pieces that can be considered ancient tools, while many of the artifacts in the studied sample only show accidental damage coming from knapping, and in some cases trampling or other taphonomic processes.

The Howiesons Poort barbs were identified on the basis of combinations of features such as the impact breaks and obliquely oriented lateral edge damage, visible with a stereomicroscope, and microscopic linear features that require magnifications of 100–500× and special filters to be seen. The authors also present evidence of the use of unretouched quartz blanks as barbs. These findings imply that the Howiesons Poort hunting weaponry was more varied than previously imagined, and involved the mounting of both formal tools – such as the famous segments – and unretouched knapping products as elements in composite weapons.

For some researchers, the Howiesons Poort still represents an anomalous and short-lived technological development, whereas for others it reflects the origins of complex cognition in the Middle Stone Age. The recent identification of barbs adds weight to the view of technological sophistication and innovation in the Middle Stone Age of Southern Africa. 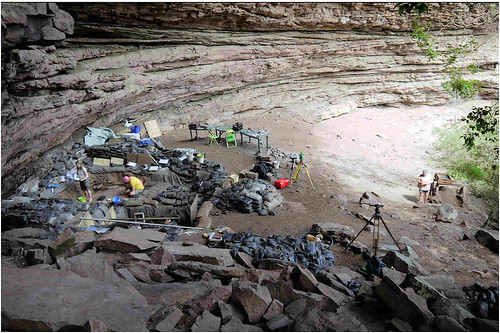 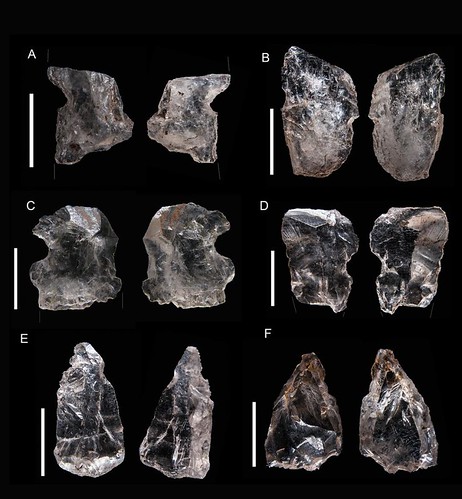 Quartz implements with micronotches from Sibudu (KwaZulu Natal, South Africa). The discovery of these types of pieces motivated the present functional study that found evidence of the use of quartz barbs in Sibudu’s Howiesons Poort. TraceoLab, Dr Paloma de la Peña and the University of the Witwatersrand 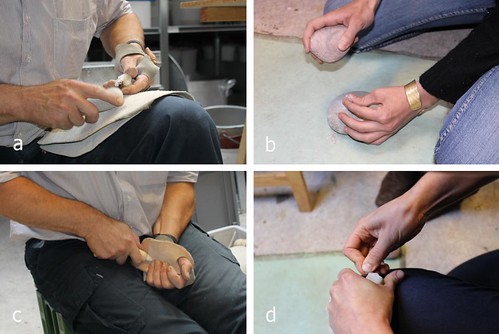 Experimental knapping of quartz to establish a framework for understanding the quartz micronotches. TraceoLab and Aurore Val 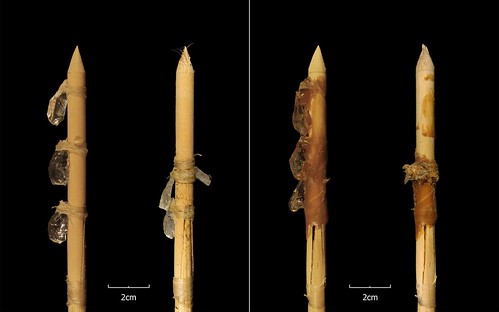 Examples of experimental hafted barbs before and after use. On the left the barbs attached with sinew moved along the shaft and hit each other upon impact. On the right only small fragments of the barbs attached with sinew and resin remain on the shaft after the shoot, resulting in small fragments partly comparable to the archaeological material. TraceoLab 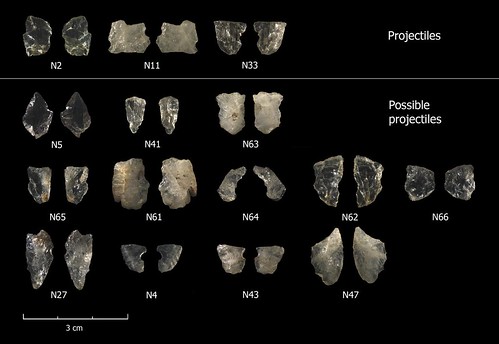 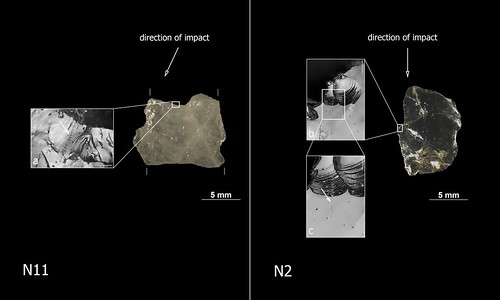 Microscopic traces of two of the quartz micronotches identified as barbs. TraceoLab